Rochelle Riley ended a nearly 20-year career as an award-winning Detroit columnist in 2019 to become the City of Detroit’s Director of Arts and Culture. She now guides the city’s investment in its creative economy and transformative innovation. In August 2020, she conceived and coordinated the United States’ first city-wide memorial to victims of Covid-19: 15 funeral processions that circled the city’s Belle Isle past 924 photo billboards of victims. The installation gained international attention and provided closure for families across the city who could not hold individual funerals. More than 25,000 cars drove past the billboards; millions viewed it online and on television; and it was featured during national coverage of President Joe Biden’s inauguration.
In 2021, Mayor Mike Duggan announced the inaugural Detroit ACE Honors, which Riley conceived to, like the Kennedy Center Honors, celebrate lifetime achievement of some of Detrroit’s greatest creatives. She also was chosen by Rhino Records to write liner notes for “Aretha,” the career-spanning boxed set of 81 newly remastered tracks, 19 making digital debuts.
Riley, an essayist, keynote speaker and artist, remains a writer by trade, warrior by necessity. She is the author of “That They Lived: African Americans Who Changed The World” (Wayne State University Press, 2021) and “The Burden: African Americans and the Enduring Impact of Slavery (WSUP, 2018). 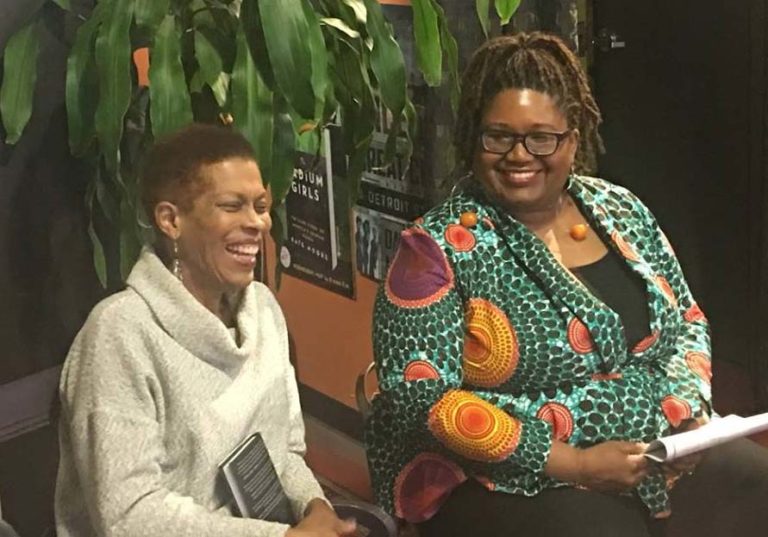 Rochelle lives near the banks of the Detroit River. But the world traveler never stays at home long. She has visited 28 countries and 33 states … and counting.

After Detroit voted to elect city council members by district for the first time in a century, Rochelle worked with a data think tank and the newspaper’s design team to create seven proposed districts. The city council later created seven council districts that looked like the ones she created.

She helped lead the effort to test victims’ rape kits that had been found abandoned in a police storage unit. She helped one women’s group raise the hundreds of thousands of dollars necessary to test the kits. The result: 1,947 cases investigated, 817 serial rapists identified.

Rochelle received the 2017 Eugene C. Pulliam Editorial Fellowship from the Society of Professional Journalists to study how trauma impedes how children learn. Her award-winning series was her final work for the Detroit Free Press and can be read here.

2021: Induction into the Michigan Business Women’s Hall of Fame

2011: Will Rogers Award from the National Society of Newspaper Columnists for community service

2009: Her columns were part of the entry that won the Pulitzer Prize for Local News

2007: Knight-Wallace Fellow at the University of Michigan, where she studied online communities and film